Before addressing the solutions possible for the decline in dressage show participation, it may be helpful to discuss how this is manifested nationwide. First let’s discuss by specific regions: West Coast, Midwest and East Coast.

The West Coast show market has historically been one of the strongest, beginning in the mid-1980S until the beginning of the recent recession in 2007. Shows developed throughout California to the degree that there have been virtually no available show dates in either Northern California (SF Bay area) or Southern California (Los Angeles to San Diego). Shows tended to be more numerous and fairly well attended.

The market was clearly segmented in upper quality top shows, a mid-range market, and a smaller show group. Showing enthusiasm propelled  competitors who populated these markets with strong attendance. The production of CDIs also here grew during the 1990s, where some years there could be 8-10 FEI competitions statewide in California.

Following the recession in 2007, the market collapsed noticeably and attendance at shows declined. Competitions were vying for the decreasing number of riders. Competitions which had previously experienced a strong 2-3 arena attendance were reduced to a light 2 arenas or even down to one. Recently, the mid-market in California has all but disappeared.

What is left is a handful of larger shows (Del Mar, LAEC, Rancho Murieta, Galway Downs and Showpark in San Diego) and those predominantly smaller shows. These smaller shows tend to be by individual facilities who engage competition managers to produce shows on the facilities’ behalf. This arrangement tends to be functional as it eliminates the facility rental fees for the managers, a major show expense otherwise. Shows must now run on tighter budgets at this level as revenues are less. The mid-market now is almost non-existent.

The shrinking of the market has created this contraction. Why is this happening?

The cost of boarding and training has increased dramatically since 2000. Operating costs are demonstrably higher for barns and must be passed on to the clients. Feed, shavings, property taxes and Workman’s Compensation Insurance have risen dramatically. Training fees increase as an economic function in relation to the board.

Yet rider income has not kept pace. If each rider can allocate (for example) $2500 each month for horse expenses, board and training constitute a major portion of this allocation (sometimes as high as 75% of this total). Expenses such as veterinary and farriers must be paid as well. As a result, very little discretionary income is left over to afford participation at competitions. Competitors are basically priced out of the market.

Is this effect the same in other parts of the country? Let’s address that next. 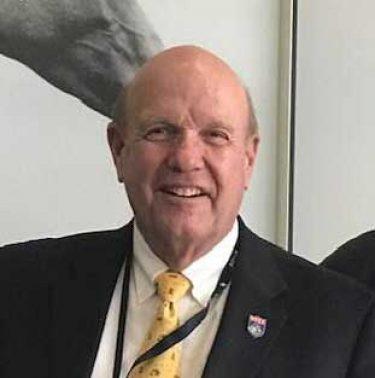 David Schmutz was born and raised in Los Angeles, California.  He starting riding late in life, while in graduate school for his MBA.  He had the great opportunity to ride with a very prominent elderly attorney, who needed one of his three horse exercised.  During many mornings, they would meet at 6am where they would ride the trails of Griffith Park in Los Angeles.   After graduate school, David  purchased his own horse, a thoroughbred, and continued training on the Griffith park trails and local jumping arenas.

While owning and managing  “The Paddock Riding Club” in Los Angeles, he graduated the USDF ‘L’ Program with distinction and then received his USEF Dressage ‘r’ certification.

It was while working on his promotion to become a USEF ‘R’ Dressage judge, that USEF offered a clinic on judging Para Equestrian riders.  Through the help of international judges Inger Bryant and Anita Own, David obtained his IPEC (International Para Equestrian Committee) approval.  Not long after, the FEI also began approving these types of competitions, Dave received his FEI card as a 3* Para Judge.  He presently holds a 4* certification.

David continues to enjoy his dual roles as judging in addition to clinics,  helping both able-bodied and para athletes achieve their best.  See more details on his website at: www.gdsdressage.com

Horse Boarding…let’s talk about it.